My title in my school district is technically "Instructional Technology Coach." But based on how I've spent a lot of my time this year, I should probably be called the #BreakoutEDU Coach. I've now had the pleasure of sharing BreakoutEDU with over 1400 different students, and many more than once!

Really though, I do want to retitle myself as the "Innovative Learning Specialist," because it covers all the random things I do and because it certainly doesn't always take a computer to innovate in the classroom! #jobgoals

Since I am the Tech Coach, I often do feel like I need to try and spread technology fairy dust everywhere I go. This week, I worked up some puzzles and clues for a Dr. Seuss-inspired, technology-enhanced BreakoutEDU game for Read Across America next week. I included multiple activities that would require the students, even kinders and first graders, to log into their Chromebooks to solve their puzzles and clues.

Some of the tasks for this game were inspired by or copied from the existing Dr. Seuss Breakouts In the BreakoutEDU collection by both Knela Newton and Patti Harju. This Breakout we are doing is the ULTIMATE Dr. Seuss mashup! I love how willingly everyone in the BreakoutEDU Facebook community shares their resources! I will try my best to give credit to the borrowed items.


It all starts with this letter from Thing One and Thing Two:


Those silly little dudes STOLE the Cat's Hat and LOCKED it in the Breakout Box! We have to get it back to him!

I changed up one of the tasks from the original lost hat game to include these apples in honor of the Seuss book, Ten Apples up on Top. I cut the apples out individually and spread them around the table. The number of apples indicated the 3-digit combo to the small lock box. For the first graders, I also included the three colored circles and taped them to the box as a hint for the order of the apple numbers. 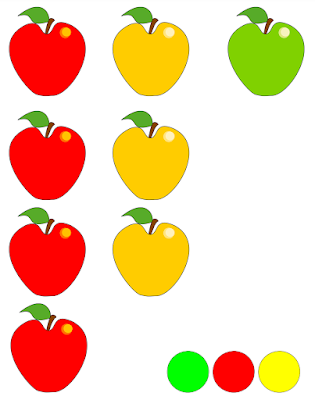 Inside the small lock box, there was a UV flashlight, a strip of paper with a website link for a later task, and a Seuss ABC chart to solve the next puzzle, which was inspired by a couple of Patti Harju's games.

I wanted to make sure the text and task were appropriate for the little ones, so I only had them decode part of this message: Oh a place you should look... is in a book! I put a key to a key lock inside of a copy of The Cat in the Hat which was hidden nearby.

Those first graders sure knew what that symbol meant! When they got to their Google Classroom, they found a link to this puzzle at Jigsaw Planet. Find it here: goo.gl/TFNfgq

The first graders frequently use the website PebbleGo.com for researching everything! This is a paid subscription, but it's a great, safe place where little ones can search and learn. The first graders knew that Pebble Go would be the perfect place to find the answer to the question on the Jigsaw Planet puzzle. Those first graders browsed to that familiar website, typed in the keyword SEUSS, and found the information they needed about when Dr. Seuss was born! The year of his birth opened a 4-digit lock.


For the answer to the directional lock, students had to solve this maze. I made this puzzle some time ago and don't remember if the maze came from another Breakout. I can't seem to find it anywhere to give it credit! I know I added the Seuss images. This maze requires seven directions, so the new multilock won't work. You'll either need a regular directional lock, or perhaps you can adapt the maze? Maybe you can start the students off by drawing in the first two legs of the route, and then they need to draw the other five. Their drawings would be five directions, which would fit on the multilock. 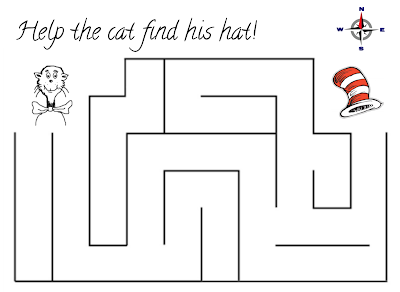 We used one of the posters from Patti Harju's game, Oh the Places You Will Go! I wrote the word AUTHOR on the poster in invisible ink. Without fail, the students always first try to spell out AUTHOR on the 5-letter lock. Once they realize they don't have enough letters to spell out that word, they usually come to realize WHICH author we are talking about!

I put this crossword puzzle out on the table as a distractor with some kids, and had to use it as an alternative task for the older kids because many of them had already played Oh the Places You Will Go. I highlighted five random letters from the puzzle solutions as the combination for the five-letter lock. 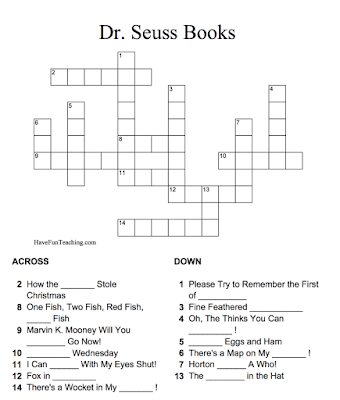 Since we have played so much BreakoutEDU this year, I have purchased some additional locks along the way. One of those locks is a 4-letter lock. I used the copy of a page from Knela Newton's game and highlighted the letters R-E-A-D randomly on the page. Even the little ones were able to put them together to open that 4-letter lock!

The last puzzle is for our 5-digit locks, but could easily be adapted to be used with a 4-digit lock. The website link that was in the small lock box reads http://tinyurl.com/SSseuss and will take students to a force-copy link of a Google Drawing. If kiddos are logged into a Google account, the item below will appear, and they can drag the character images into the table. The students should use the rainbow clue on the page to determine the order of the numbers. So far, the rainbow hasn't been anyone's first guess! They usually try to put them in by value from smallest to largest. I added a sixth unnecessary image to keep the students on their toes!

This Breakout has SEVEN LOCKS! The kids did amazing though, and all of the groups broke out in under 45 minutes. I tried this game with first graders, fourth graders, and with kindergarteners this week, and have a long list of classroom visits planned for our Read Across America celebration next week! 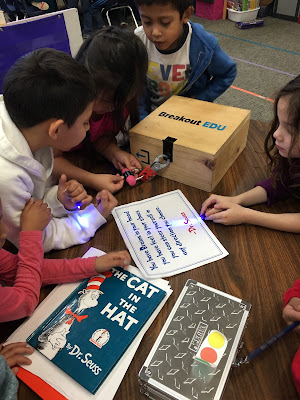 My messy collection of resources for this version of the Dr. Seuss games can be found in one doc here: goo.gl/j0PYDJ. Find Patti Harju and Knela Newton's original games at BreakoutEDU.com.

Posted by Susan Stewart at 1:51 AM